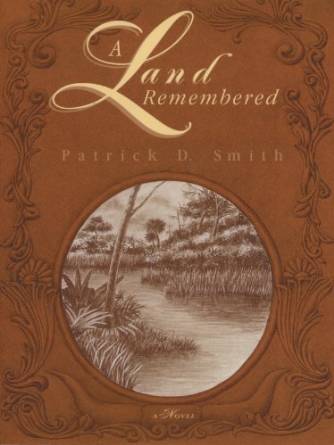 In this best-selling novel, Patrick Smith tells the story of three generations of the MacIveys, a Florida family who battle the hardships of the frontier to rise from a dirt-poor Cracker life to the wealth and standing of real estate tycoons. The story opens in 1858, when Tobias MacIvey arrives in the Florida wilderness to start a new life with his wife and infant son, and ends two generations later in 1968 with Solomon MacIvey, who realizes that the land has been exploited far beyond human need. The sweeping story that emerges is a rich, rugged Florida history featuring a memorable cast of crusty, indomitable Crackers battling wild animals, rustlers, Confederate deserters, mosquitoes, starvation, hurricanes, and freezes to carve a kingdom out of the swamp. But their most formidable adversary turns out to be greed, including finally their own. Love and tenderness are here too: the hopes and passions of each new generation, friendships with the persecuted blacks and Indians, and respect for the land and its wildlife. A Land Remembered was winner of the Florida Historical Society's Tebeau Prize as the Most Outstanding Florida Historical Novel. Now in its 14th hardcover printing, it has been in print since 1984 and is also available in trade paperback.

Patrick Smith is a 1999 inductee into the Florida Artists Hall of Fame, the highest and most prestigious cultural honor that can be bestowed upon an individual by the State of Florida.
In May 2002 Smith was the recipient of the Florida Historical Society’s Fay Schweim Award as the “Greatest Living Floridian.” The one-time-only award was established to honor the one individual who has contributed the most to Florida in recent history. Smith was cited for the impact his novels have made on Floridians, both natives and newcomers to the state, and for the worldwide acclaim he has received.

Smith has been nominated three times for the Pulitzer Prize, in 1973 for Forever Island, which was a 1974 selection of the Reader’s Digest Condensed Book Club and has been published in 46 countries; in 1978 for Angel City, which was produced as a “Movie of the Week” for the CBS television network and has aired worldwide; and in 1984 for A Land Remembered, which was an Editors’ Choice selection of the New York Times Book Review. In the 2001 The Best of Florida statewide poll taken by Florida Monthly magazine, A Land Remembered was ranked #1 Best Florida Book. The novel also ranked #1 in all the polls since then. Smith’s lifetime work was nominated for the 1985 Nobel Prize for Literature, and since then he has received five additional nominations.

In 2008 he was honored with a Literary Heritage Award at the 1st Annual Heritage Book Festival in St Augustine. FLorida's Secretary of State Kurt Browning presented the award.

In 1995 Patrick Smith was elected by The Southern Academy of Letters, Arts and Science for its highest literary award, The Order of the South. Previous recipients include Eudora Welty, James Dickey, and Reynolds Price. In 1996 he was named a Florida Ambassador of the Arts, an honor given each year by the state of Florida to someone who has made significant contributions to Florida's cultural growth. In 1999 Smith was inducted into the Florida Artists Hall of Fame, which is the highest and most prestigious cultural honor the state bestows upon an individual artist. Prior inductees include writers Marjorie Kinnan Rawlings, Zora Neale Hurston, and Ernest Hemingway.

In October 1990 he received the University of Mississippi’s Distinguished Alumni Award and was inducted into the University’s Alumni Hall of Fame. In 1997, the Florida Historical Society created a new annual award, the Patrick D. Smith Florida Literature Award, in his honor.

Thousands of people of all ages have enjoyed his books and his talks. With his new DVD, A Sense of Place, you can spend an intimate hour with this soft-spoken author and gain an insight into the creative processes that resulted in his beloved books.

Patrick lives in Merritt Island, Florida with his wife Iris and his beloved cats.

I gave this book 5 stars. What did you think of this book? What book would you #tellafriend about this week?