Brambleman – If you loved a book 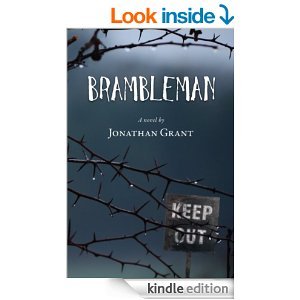 Brambleman – If you loved a book

Winner of the 2013 Benjamin Franklin Award for popular fiction

Down-and-out Atlanta writer Charlie Sherman has no idea what madness awaits him when a mysterious stranger convinces him to finish a dead man’s book about a horrific crime that's gone unpunished for decades.

What Charlie inherits is an unwieldy manuscript about the mob-driven expulsion of more than 1,000 blacks from Forsyth County, Georgia in 1912. During the course of his work, Charlie uncovers a terrible secret involving a Forsyth County land grab. Due to its proximity to Atlanta, the stolen farm is now worth $20 million—and a sale is pending.

When he finds the land’s rightful owner, Charlie becomes convinced he's been chosen by a Higher Power to wreak justice and vengeance on those who profit from evil.

And then things go horribly wrong.

HISTORICAL BACKGROUND: Forsyth County, famous as the birthplace of Hee-Haw’s Junior Samples, has for most of the past century, existed as an intentionally all-white community bordering the black Mecca of Atlanta since 1912, following one of the 20th century’s most violent racist outrages—including lynching, nightriding, and arson.

In 1987, the sleepy community gained notoriety when a small march led by civil rights firebrand Hosea Williams was broken up by rock- and bottle-throwing Klansmen, neo-Nazis, and their sympathizers. Bloody but unbowed, Williams returned the next week with 25,000 followers in one of largest civil rights marches in history. There was talk of reparations. Oprah came. Protests and counter-protests yielded a landmark Supreme Court case on free speech. But most importantly, white people flocked to Forsyth. It became the fastest- growing county in the nation, the richest one in Georgia, and one of the twenty wealthiest in the U.S.

Jonathan Grant is the author of two novels, CHAIN GANG ELEMENTARY and BRAMBLEMAN, which won the IBPA's 2013 Benjamin Franklin Award for popular fiction. He is also the co-author/editor of his late father's monumental history, THE WAY IT WAS IN THE SOUTH: THE BLACK EXPERIENCE IN GEORGIA (UGA Press, 2001). This work was named Georgia's nonfiction “Book of the Year” and Editor's Choice at American Heritage magazine. His third novel, PARTY TO A CRIME, is scheduled for publication by Thornbriar Press in 2014.

Grant grew up on a Missouri farm. came down South, and graduated from the University of Georgia. The former journalist, state government spokesman, PTA president, and soccer coach lives in Atlanta with his wife and two children.

He is currently at work on THE UNHAPPY HISTORY OF HIGGSTON, MISSOURI, the unfortunate tale of a drone strike on a small Midwestern town. He calls it “The Honey Badger of zombie novels.”

I gave this book 4 stars. What did you think about the book? What book would you recommend to a friend this week?