Fried Green Tomatoes – If you loved a book 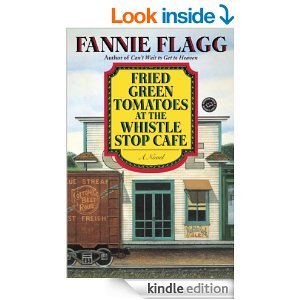 Fried Green Tomatoes – If you loved a book

Cleo Threadgood, 86, shares a lifetime of memories of Whistle Stop, Ala. where the social scene centered on its one cafe with Evelyn Couch, a younger woman who is looking for meaning in her life.

“The people in Miss Flagg's book are as real as the people in books can
be. If you put an ear to the pages, you can almost hear the characters
speak. The writer's imaginative skill transforms simple, everyday events
into complex happenings that take on universal meanings.”

“This whole literary enterprise shines with honesty, gallantry, and love
of perfect details that might otherwise be forgotten.”

“Watch out for Fannie Flagg. When I walked into the Whistle Stop Cafe she
fractured my funny bone, drained my tear ducts, and stole my heart.”

–Florence King, Author of Confessions of a Failed Southern Lady

FANNIE FLAGG began writing and producing television specials at age nineteen and went on to distinguish herself as an actress and writer in television, films, and the theater. She is the author of the New York Times bestsellers Daisy Fay and the Miracle Man, Fried Green Tomatoes at the Whistle Stop Cafe (which was produced by Universal Pictures as Fried Green Tomatoes), Welcome to the World, Baby Girl!, and Standing in the Rainbow. Flagg's script for Fried Green Tomatoes was nominated for both the Academy and Writers Guild of America Awards and won the highly regarded Scripters Award. Flagg lives in California and in Alabama.

If you loved a book, tell a friend!

I gave this book 5 stars. If you've read it what did you think? What recent book would you recommend to a friend?
[mybooktable book=”passing-perfect”]