Miles To Go – If you loved a book 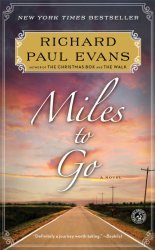 Miles To Go – If you loved a book

Alan Christoffersen, a once-successful advertising executive, wakes one morning to find himself injured, alone, and confined to a hospital bed in Spokane, Washington. Sixteen days earlier, reeling from the sudden loss of his wife, his home, and his business, Alan left everything he knew behind and set off on an extraordinary cross-country journey. Carrying only a backpack, he planned to walk to Key West, the farthest destination on his map. But a vicious roadside stabbing has interrupted Alan’s trek and robbed him of his one source of solace: the ability to walk.Homeless and facing months of difficult recovery, Alan has nowhere to turn—until a mysterious woman enters his life and invites him into her home. Generous and kind, Angel seems almost too good to be true, but all is not as it appears. Alan soon realizes that before he can return to his own journey, he must first help Angel with hers.From one of America’s most beloved and bestselling storytellers comes an astonishing tale of life and death, love and second chances, and why sometimes the best way to heal your own suffering is by helping to heal someone else’s.Inspiring, moving, and full of wisdom, Miles to Go picks up where the bestseller The Walk left off, continuing the unforgettable series about one man’s unrelenting search for hope.

When Richard Paul Evans wrote the #1 best-seller, The Christmas Box, he never intended on becoming an internationally known author. His quiet story of parental love and the true meaning of Christmas made history when it became simultaneously the #1 hardcover and paperback book in the nation. Since then, more than eight million copies of The Christmas Box have been printed. He has since written eleven consecutive New York Times bestsellers. He is one the few authors in history to have hit both the fiction and non-fiction bestseller lists. He has won several awards for his books including the 1998 American Mothers Book Award, two first place Storytelling World Awards, and the 2005 Romantic Times Best Women Novel of the Year Award. His books have been translated into more than 22 languages and several have been international best sellers.