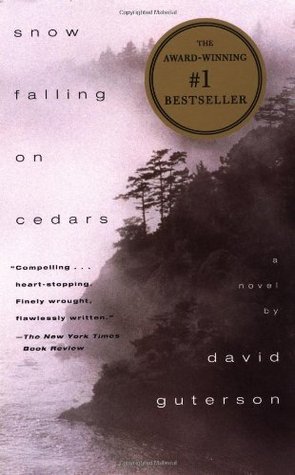 San Piedro Island, north of Puget Sound, is a place so isolated that no one who lives there can afford to make enemies. But in 1954 a local fisherman is found suspiciously drowned, and a Japanese American named Kabuo Miyamoto is charged with his murder. In the course of the ensuing trial, it becomes clear that what is at stake is more than a man's guilt. For on San Piedro, memory grows as thickly as cedar trees and the fields of ripe strawberries – memories of a charmed love affair between a white boy and the Japanese girl who grew up to become Kabuo's wife; memories of land desired, paid for, and lost. Above all, San Piedro is haunted by the memory of what happened to its Japanese residents during World War II, when an entire community was sent into exile while its neighbors watched. Gripping, tragic, and densely atmospheric, Snow Falling on Cedars is a masterpiece of suspense – one that leaves us shaken and changed.

He is best known as the author of the novel Snow Falling on Cedars (1994), which won the 1995 PEN/Faulkner Award. To date it has sold nearly four million copies. It was adapted for a 1999 film of the same title, directed by Scott Hicks and starring Ethan Hawke. The film received an Academy Award nomination for cinematography. Guterson's subsequent novels are East of the Mountains (1999), Our Lady of the Forest (2003), and The Other (2008). He is also the author of a short story collection, The Country Ahead of Us, the Country Behind (1989) and of a book of essays on education called Family Matters: Why Homeschooling Makes Sense (1992).

Guterson was born in Seattle, Washington, and received an M.A. from the University of Washington. A Guggenheim Fellow, and a former contributing editor to Harper's magazine, he is a co-founder of Field's End, an organization for writers.

I gave this five stars. What did you think of this book? What book would you recommend to a friend this week?