Whistling through the Graveyard – If you loved a book 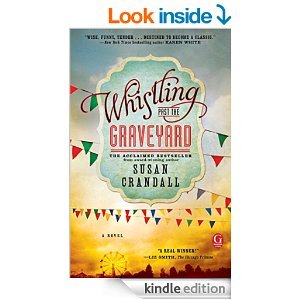 Whistling through the Graveyard – If you loved a book

The summer of 1963 begins like any other for nine-year-old Starla Claudelle. Born to teenage parents in Mississippi, Starla is being raised by a strict paternal grandmother, Mamie, whose worst fear is that Starla will turn out like her mother. Starla hasn’t seen her momma since she was three, but is convinced that her mother will keep her promise to take Starla and her daddy to Nashville, where her mother hopes to become a famous singer—and that one day her family will be whole and perfect.

When Starla is grounded on the Fourth of July, she sneaks out to see the parade. After getting caught, Starla’s fear that Mamie will make good on her threats and send her to reform school cause her to panic and run away from home. Once out in the country, Starla is offered a ride by a black woman, Eula, who is traveling with a white baby. She happily accepts a ride, with the ultimate goal of reaching her mother in Nashville.

As the two unlikely companions make their long and sometimes dangerous journey, Starla’s eyes are opened to the harsh realities of 1963 southern segregation. Through talks with Eula, reconnecting with her parents, and encountering a series of surprising misadventures, Starla learns to let go of long-held dreams and realizes family is forged from those who will sacrifice all for you, no matter if bound by blood or by the heart.

Unlike so many writers, Susan Crandall did not emerge from the womb with a pen and paper in hand and a fully formed story in her mind. Instead, she was born with an incredible love for books. This must be genetic, because her father and now her son, both hated school, but are somehow addicted to books.

For much of her young life, even those exhausting years when her children were young and Susan worked in her previous profession (yes, the rumor is true, she was a dental hygienist) she was an avid reader. Susan has always been fascinated with words – those of you who catch yourself reading the dictionary when you cracked it open to look up mesopelagic you just might have a writer hiding inside you, too.

Then, her younger sister admitted that she'd been writing, secretly of course. That admission led to Susan editing her sister's work (as the older sister, Susan was never short of opinions to share). Then Susan and her sister co-authored four novels, none of which were published. Her sister decided to move on after those four books, but Susan was totally addicted. She'd learned too much about the process of writing, the craft of storytelling and the world of the written word to give it up.

Susan grew up in a small Indiana town, married a guy from that town, and then moved to Chicago for a while. She is pleased to say that she has been back in her hometown for many years and plans to stay. She and her husband have two grown children. “They make me proud every day,” Susan glows. “My son, who has the heart of a poet, is also a writer. My daughter, who is both beautiful and brilliant, is about to take her first steps into the working world of science.”

If you loved a book, tell a friend.

My rating for this book was 4 stars. What did you think? What book would you recommend to a friend this week?