Will it be Cabinets or Cabernet?

On what would otherwise be considered a reasonably uneventful day, the water heater in out bedroom closet broke.

Broke or sprung a leak, it's hard to say because by the time I discovered it, there was a flood in our master bedroom and bath. I'm not talking wet spot, I'm  talking FLOOD!

Since Sugar is still in training (more about that later) we have been keeping the bedroom door closed to prevent any accidents (like her having a teeny-tiny misplaced dribble.) Which is why no one noticed the steamy hot water soaking into the carpet, climbing the walls and running through the  hallway into the master bath. That was until I went in there at ten o'clock at night. Normally, we go to bed much later, but since Dick was watching the basketball game, I decided to sit in bed and read on my iPad.

When my right foot landed on the carpet water squished up and I screamed, “Dick! Come in here, there's water all over the floor.”

Realizing I am all too often given to hyperbole, he answered, “Wait a minute, there's only forty seconds left in the half.”

This happened over a month ago and we are still living in the guest room. A water restoration company came in the middle of the night, sucked up most of the water and said they'd be back in the morning. By the end of day two the carpets were gone, the baseboard was gone, the walls were partly gone and the bathroom vanities were ready to go. Replacing our restful retreat, were six hurricane strength fans and a de-humidifier the size of a small apartment. After seven days of dry-out, we were ready to start re-doing everything. 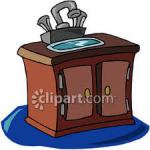 “We should get dark wood vanities,” Dick suggested.

“That won't match anything else in the house,” I answered. “If we put dark wood in the bathroom, we need to redo the kitchen cabinets so they are also dark wood.”

“What does one have to do with the other”

“They're in the same house. Besides, I'm tired of our Kitchen, it's so white.”

“It's Florida,” Dick said, “Most houses have white kitchens.”

“Yes, but they have different countertops.”

“What's wrong with our Corian (cost a fortune) countertop?”

By now you are probably laughing and thinking this is like a scene from one of my novels…Nope, I learned how to create those scenes from conversations like this. Rather than bore you with nine pages of such dialogue, I'll now cut to the chase.

We have spent several weeks and most likely thousands of words discussing this subject and getting price quotes/design ideas from cabinet makers up and down the East Coast of Florida. They now hide when they see me coming, but I think we may be closing in on a cabinet decision.

If not, I am going to pour myself a glass of Cabernet and forget about cabinets and countertops for a while.  I'm sure there will be more to come on this fiasco.