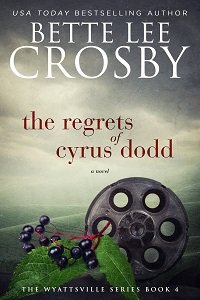 When I first read the title of the book, I expected Cyrus Dodd to be an old man, pondering the things that went wrong in his life. But it turns out Cyrus is a young man with some difficult and trying times in his life, beginning with a feud with Virgil Jackson over the ownership of a piglet. And on top of that Virgil's land had an underground spring that bubbled an endless stream fresh water, enough to feed the brooks running across three different farms, the Dodd farm included. The pig argument spiraled into Virgil's decision to dam up the water flowing to Cyrus' farm.

Cyrus continues his struggle to keep his farm alive, without the needed water. He tries different crops on different section of the farm, but to no avail. He can't keep up the farm, and decides to give it up and move on to a different job, taking his loving wife, Ruth with him. As his life unfolds, and he has more and more regrets, the loss of the farm, moving to some other place, dragging his wife along with him, trying to keep her happy in spite of all of his regrets. When he assesses his life, regret his all he sees. He is a stubborn and prideful man.

I enjoy Bette Lee Crosby's stories from the 20th century, stories of hardship and love; stories that tug at the heartstrings with characters I never forget.