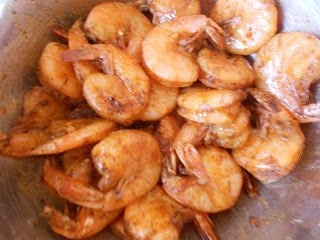 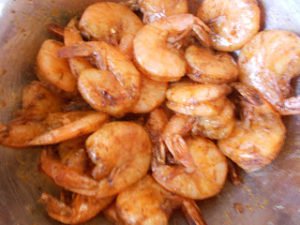 With September 11th the start of football officially began. To get you ready Naomi shares a great tailgating recipe for you to make even if you're not into football.

Naomi says, In tailgating, it is simply common knowledge that I will have some form of a seafood, normally shrimp, hanging around. As a result, I am always on the lookout for some tasty morsels that can be included on my spread.

When I saw this one on A Bachelor and His Grill, I knew it would make an appearance somewhere, I just wasn't sure when. When I decided to make Grilled Creole Steak with Creole Gorgonzola Butter and my crock pot baked potatoes for the Bears/Packers game, I knew I found its' time to shine. Shine it did.

Now, on his site, David Olson has his shrimp peeled and on skewers. Because shrimp are so temperamental in cooking and can go from scrumptious to rubber in the snap of fingers, plus shrimp are so easy to peel, I keep the shell on and grill individually.

Every piece of these shrimp were GONE! They had a nice flavor to them that really either could complement a main dish or be one on its' own served with a creole spaghetti.

On a separate note, this rub is one that I will be using on other forms of seafood. The taste in this rub was spectacular and versatile.

One last point in how I served these. David had squeezed the lemon over the shrimp after they came off the grill. Because I kept the shell on mine, I served mine with lemon wedges for my family to squeeze the lemon juice on after peeling.

2) Add Shrimp to mixing bowl with spice rub ensure each shrimp is well coated. Allow to marinade for a good 1-2 hours.