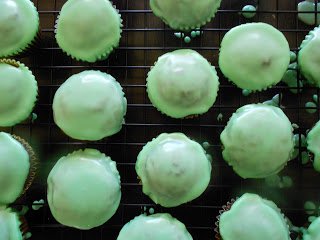 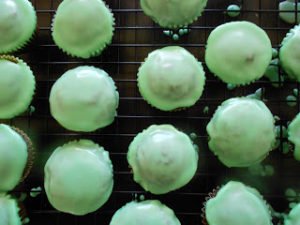 Parties, whether for 2 or 30, are always fun. Hopefully, we're at the tail end of old man winter and ready to celebrate Saint Patrick's Day with another series of Mid-Week Mixers from Naomi's Pub and Grub Forum. Get your green on with these little, sweet bites of goodness.

Naomi says: I love St. Patrick's Day. As an individual, who primarily considers herself as a South Side Chicago Irish Catholic with a splash of Hungarian, St. Patrick's Day is a very important celebration for me. Lately, I have bumped that up that celebration. So, stumbling around, you guessed it, Pinterest one day, I stumbled upon this recipe for Irish Car Bomb Brownie Bites. Now, the drink the Irish Car Bomb is kind of disgusting. Basically, it is a little under a pint of Guinness Stout, which has a layered shot of Jameson whiskey and Bailey's Irish Cream, dropped into it. It must be drank very quickly otherwise the Bailey's will curdle. The taste is interesting, though. I have to admit that I am not that guzzling type of girl, so I get curdling. Also, I have to be honest and say that I only tried it once and only made it through and inch or so of the drink!! Back to topic…the flavors of the Irish Car Bomb are intriguing, so when I came across this recipe, I wanted to see how the developer handled it, so it became my Recipe Review this week!

I must say that all my “samplers” loved this recipe. They lasted in my house a very short time because my family was popping them like popcorn.

Some little notes:
* The creator of the recipe didn't use liners in her recipe which I did. I dipped my bites versus drizzling them with the glaze as in the original recipe and didn't want to paw the food too much.
* The original recipe called for 1/4 c. to 1/2 c. Guinness. I went for the maximum amount and was happy with the result. It gave the brownie a bit of a bite.
* I omitted the water and used full alcohol for the glaze. There really isn't alot of alcohol in the glaze and you want to be able to taste the Irish Cream and Jameson's over the sweetness of the powdered sugar. I also ended up making a second batch of the glaze to “double dip” my bites. Note the color above!

Instructions:
1) Prepare brownie mix as directed on back of the box except substitute 1/2 cup Guinness Stout for water.
2) Line MINI muffin pan with liners. Fill liners 3/4 of the way with brownie batter.
3) Bake in 350 degree oven for 20 minutes.
4) Remove to cooling rack and repeat process until batter is all gone.

Glaze Directions:
1) Place all ingredients in a bowl and stir until smooth
2) Dip cooled brownie bites in glaze and allow excess to drip off.
3) Let icing dry and repeat if desired. Additional glaze might have to be made if desired.