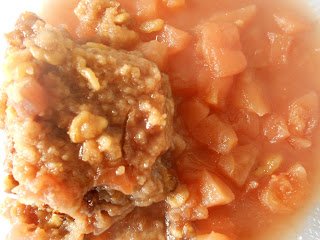 Naomi says: For Thanksgiving, I did a whole bunch of cooking and wanted dessert to be really simple and not have to play with it. As my standard practice, I started stumbling in my favorite recipe sites for anything dessert and crock pot. This one glared at me and I knew it would be the Blackburn Thanksgiving dessert. It did not disappoint. The apples were loaded with cinnamon and the topping was extra special with its' walnuts loaded into it.

Note: I served this with a French Vanilla ice cream. I took the picture prior to adding it so the picture would show how it looks.

1) Mix flour, brown sugar, 1/2 cup of white sugar, 1/2 teaspoon cinnamon, nutmeg, and salt together in a bowl. Combine butter with the flour mixture using fingers or a fork until coarse crumbs form. Stir in walnuts and set aside.

2) Whisk together 1/3 cup sugar, cornstarch, ginger, and 1/2 teaspoon cinnamon. Place the apples in a slow cooker, stir in the cornstarch mixture; toss with lemon juice.

4) Cover and cook on High for 2 hours or Low for 4 hours, until apples are tender.

5) Partially uncover the slow cooker to allow the topping to harden, about 1 hour.