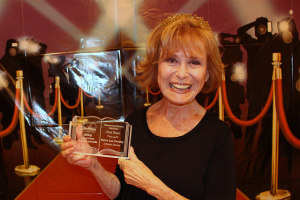 Bette accepting her award at the Florida Writer's Conference

Earlier this year, Jubilee’s Journey won the President’s Book Award Gold Medal for Adult Fiction from the Florida Publisher’s Association and was the Indie Book of the Day in May 2014. Previously Loved Treasures, the second book in the Serendipity Series, picked up a second place award in the Women’s Fiction category. Crosby received her awards on October 25, 2014 at the Awards Banquet during the annual Florida Writers Conference, held in Lake Mary, Florida.

On November 22, Bette Lee Crosby will be attending the Miami Book Fair International at Miami Dade College. Award-winning books Cracks in the Sidewalk and Previously Loved Treasurers will be sold in the Readers’ Favorite® booth, with all proceeds benefiting St. Jude’s Children’s Hospital, Meals on Wheels, Kids in Need, and The Adult Literacy League.

Crosby, author of ten novels and winner of twenty literary awards including the 2013 Royal Palm Literary Award for Women’s Fiction, has carved out a unique niche in writing stories about older women facing real life challenges. Her protagonists are sassy, smart, and Southern. They deal with issues like unwanted children, loss of a spouse, and financial ruin. Readers identify with Crosby’s characters and have turned her books into a #1 Bestsellers on Barnes & Noble and Amazon.

Jubilee's Journey, along with Crosby’s other novels can be found online at iBooks, Amazon, Barnes & Noble, and Kobo. Her books are currently selling in five countries.