So many wonderful things happened in September it's almost hard to know where to start…but I'll start by saying it's my birthday month and with so many readers adding Spare Change to their TBR list, Bent Pine Publishing decided to help me celebrate by giving those readers not one, but two FREE days of downloading SPARE CHANGE to their Kindle. It turned out to be the biggest and best party ever! 42,778 people came and downloaded the book from Amazon.  I was awed by the turnout and many of those that downloaded the book came back a few days later and posted glowing reviews. These great reviews and word of mouth recommendations pushed Spare Change into Amazon's top 200 for a few days and now it has settled comfortably, rocking back and forth between the #1 and #2 rank for Historical Mysteries.

Could I ask for more? Well…many of those who read Spare Change indicated in their review that they intended to seek out my other work, and they 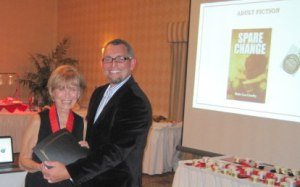 have. The ratings have increased for THE TWELFTH CHILD, CRACKS IN THE SIDEWALK and even the newbie CUPID'S CHRISTMAS.

Banquet, LIFE IN THE LAND OF IS received the President's Book Award Gold Medal for a Memoir and SPARE CHANGE received a Silver Medal for Adult Fiction.  Unlike the Academy Awards, there were no acceptance speeches, but if there were, this is what I would say…

From the bottom of my heart I thank the reviewers who made time to read this little known book and then give of their time to post reviews. I also thank the handful of fans and followers who believed in me from the start, who began reading my books, laughing in all the right places, and sharing the stories with their friends. The Goodreads Gals in the Sisterhood of the Traveling Book and Novel Ladies have been an awesome source of support and encouragement, not only to me, but to so many Indie Authors. And I thank so many of the other Indie Authors  who have given me counsel and advice, listened to my tales of woe and shared in the glee of my success, I am very fortunate to have found such wonderful friends in what can often be a very competitive business. Since there were no acceptance speeches, I never got the chance to say these things, but somehow I think these people already know how I feel.