IN THE NEWS …A VISIT WITH THE PORT ST. LUCIE GFWC WOMEN

I was honored to speak at the September meeting of the Port Saint Lucie Women’s Club, a group that is part of the International GFWC (General Federation of Women’s Clubs.) The luncheon meeting was held at the Holiday Inn on Federal Highway.

In addition to a wonderful lunch, these lovely ladies listened to my stories of family relationships, plus a reading from my latest release, Cracks in the Sidewalk, the novel that received the 2009 Royal Palm Literary Award from the Florida Writer’s Association. This storyis taken from a tragic incident that happened in the life of a dear friend. The loss of this woman’s grandchildren was such a moving tale that, once told to me, it stayed in my mind for nearly ten years before I summoned the courage to actually write about it. Yes, in some ways this is a sad story, but in the end it’s life affirming. It’s the type of story that proves just how much a single person can change the lives of so many others.

I currently have two more novels that are awaiting publication – What Matters Most and Spare Change, the manuscript that is now a finalist in the 2010 Royal Palm Literary Award Competition. As a writer I spend a good part of every day at the computer, and right now I am focusing on an autobiography of Lani Verner Deauville, a Sebastian resident and the planet’s longest living quadriplegic. Working with Lani, is a truly wonderful experience. Her attitude and outlook on life is so inspiring that it a story begging to be told.

Lani believes in the moment of IS—it’s the reality of right here and right now. According to her, you can’t do anything about the past, but you can do something about the future—she has not only done more than most people every dream of doing, but she’s done it from a wheelchair! It is little wonder,that I am enthralled to be working with such a woman? 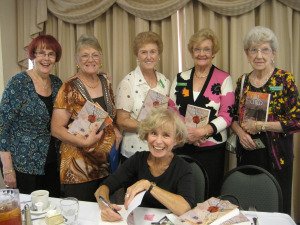