ON THE ROAD AGAIN

The only down side of being an author is that I spend way too much time at the computer hanging out with my fictional friends.  But, I am happy to say that for the past few weeks, I have been leaving my technological child behind and going on the road to meet some of my wonderful women readers. My fist stop was the Sebastian Women's Club where I was greeted by Sara Dessureau, President of the GFWC Sebastian Group. I spoke at length about LIFE IN THE LAND OF ‘IS' since it is a memoir of Lani Deauville, a woman listed in the Guinness Book of Records as the world's longest living quadriplegic, and Lani also happens to be a Sebastian resident. 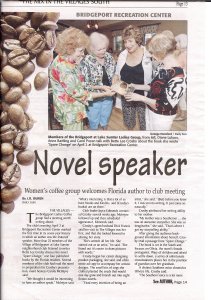 In April I did my first speaking engagement at the Villages which I discovered is a delightful town of 110,000 residents. I  was scheduled to speakto the Lake Sumpter Ladies Group, but upon arrival I was also greeted by a reporter for the town newspaper and their TV Station newsman.  It was a whirlwind of activity that resulted in a taped interview that was broadcast the following week and a feature article in the MIX SOUTH, a supplement to the Daily Sun.

Since this was not a book club, I assumed that few, if any, ladies had read my books, but I was pleasantlysurprised to find that several of the ladies had read not just one book but both novels and they were filled with questions – not only about the characters and backgrounds of the the stories they had read, but also about The Twelfth Child, the book scheduled for May release. One of the questions that almost always pops up is how I came up with the idea for the book – this is especially true of Spare Change. I told the truth of how the idea came to me…we were visiting friends on the Eastern Shore of Virginia, a narrow strip of land where you can drive for miles without seeing anything but scrub brush and farmland, and seeing a place so remote made me think that a murder could happen out here and no one would hear it. That was the birth of an idea and a year later I gave birth to Spare Change. 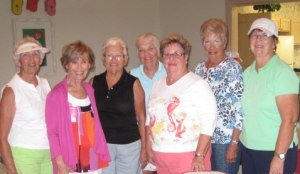 I have to believe the group enjoyed my talk because just weeks later I was invited back to the Villages to speak to the Bailey Trail Ladies. One of the interesting things about this group is when I asked (and I always do) how many members of the audience read on an e-reader like Nook or Kindle – it was probably 75% – 80% who did.

It's wonderful to see people moving over to the e-readers.  The e-reader revolution has put a major crimp in the monopoly that the big six held on the publishing industry. E-readers level the playing field and enable the independant publishers to offer great books at a more reasonable prices. One of the other things that I personally love about both the Kindle and Nook is that readers can download a free sample of a book that they're considering. That 15 or 20 pages enables the reader to see whether or not they would enjoy reading the book.  This has become my preferred method of shopping for books, and I hope it will become yours.  And yes, a free sample is available on all four of my books, so enjoy.