Is There Such A Thing as Fun After Fifty?

Ask Donna Cobb Swift that question and your answer will be a resounding YES!  Donna was a swinging single who didn't marry until she was just a tad over fifty. So did she then settle into her Sadie, Sadie, Married Lady role and begin knitting booties for nieces and nephews…absolutely not! She began to really live, once she hit the big 50. Now retired, she's probably one of the busiest, happiest, most vital women I know. So let's move on to the meat of this story–what's her secret? To find out, I asked Donna.

“Don't sit and watch life pass by,” she said, “get involved – pursue interests that always intrigued you but didn't fit into your schedule. Stay in touch with friends. So what if most of your college pals are grandmas whose primary interest is their grandchild; hold back on telling about the hybrid orchid you're cultivating…instead, really listen when they  talk about their grandbabies and before long you'll discover yourself sharing in their joy. To find the happiness in friendships, you have to realize the world doesn't always revolve around you…you've to learn how to revolve around it. This means moving into your friends' lives, and don't expect them to move into yours.”

But there's more to Donna than simply long-lasting friendships, which after living in sixteen different cities she has plenty of, extending across the states and beyond. Gardening was always one of her passions, so now that she has time, she doesn't just garden…she's a member of the St. Lucie West Garden Club and the Port St. Lucie Orchid Society. Here again, she's not just a member, she's a super active member who volunteers for anything and everything. She even has plans to pursue a career as a Floral Designer and is willing to travel for as far as 100 miles to find the courses required for accreditation.

Her husband Ron's business takes him out-of-town and quite often out of the country, so he's gone almost 75% of the time.forgetting that Donna was Donna,  I asked if she ever got lonely. “Lonely?” she repeated, gathering her purse and her two pooches into her arms, “Who has time to be lonely?”

Donna left me with a very poignant thought…”These are the best days of my life,” she smiled, “I'm no longer struggling for greater success, I'm not fighting to find my identity, I've accepted who I am and I like me. I've reached the point where it no longer matters if I'm fat or skinny, dressed to the hilt or wearing jeans, what matters is who I am inside. I've learned that happiness is a state of mind, not a state of body.” With that, she flounced out the door,  jumped into her SUV and drove off leaving me with that thought. 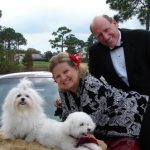 Donna is shown here with Ron and the two pooches

Donna doesn't just do these things, she plays golf, drives back and forth to Kentucky to visit family, cruises through Atlanta to drop in on an old friend and occasionally accompanies Ron on his jaunts – this spring she's off to China and Russia. I don't see Donna as often as I might like, and when she does stop by I sometimes feel like a tornado has just blown through, but she is colorful, fun and a delight to be with. Busy as she is, she finds time to go with me to various speaking engagements and she cheers me on as if she hadn't heard that same speech ten times before. Lucky me. We could all use more friends like Donna.

One last word of advice…If you've got someone like Donna in your circle of friends, don't wait for them to catch up with your life…jump into theirs, you'll be glad you did.