It's hard to believe it was a little less than two years ago that Bent Pine launched my publishing platform and today when I checked the Amazon rankings, three of my books were in the Amazon Top 100 Kindle Books for their Category.

CRACKS IN THE SIDEWALK is in the top 100 FAMILY SAGA 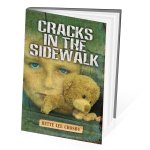 Thank you readers and reviewers!

There are not enough words to adequately thank the hundreds and hundreds of people who took time to post a comment on Goodreads or Amazon. Without the kindness of those people word of mouth would have never spread as rapidly as it has.

I try to send a short note of thanks to everyone on Goodreads who has reviewed one of my books, but the list is now so long that I sometimes miss a few. So if I have not personally thanked you for your review, please know that I read every one and treasure tham all.

1)                  In the opening chapter the elderly Abigail Anne Lannigan rapidly develops a friendship with Destiny Fairchild, a young woman in her early twenties – do you think such a friendship is unlikely? Why do you think a young girl would have an interest in such an elderly woman?  Did you early on consider that Destiny had an ulterior motive in developing the friendship?

2)                  Abigail Lannigan took an immediate dislike to Elliott, even though he was supposedly a blood relative – why do you think she felt that way?  What was your reaction to Elliott? How did you feel about Abigail tricking him into claiming he was a Baptist?

4)                  Abigail’s father was set on the idea of her marrying Henry Keller, do you think he was simply concerned with her welfare or had ulterior motives?

6)                  Judith Troy, Abigail’s school teacher, went against William Lannigan when she helped his daughter get a job in the city and leave home – do you think she had the right to interfere in such a manner? What would you have done?

7)                  During the Great Depression when she was hungry and out of options, Abigail took the job in a speakeasy, even though she knew it was illegal and she could have been arrested, what would you have done? Should she have considered returning home and marrying Henry as her father wanted her to?

8)                  Abigail seemed to fall in love with John Langley the moment he walked into the library, have you ever experienced a similar reaction to someone? Do you think she was simply awed by him, or is such a reaction is possible?

9)                  Abigail knew John was a travelling salesman, but should she have been suspicious when he kept finding excuses for being elsewhere during the holidays? Should she have confronted him about this? And, why do you think she didn’t?

10)              When Abigail told John she was expecting a baby, he said he couldn’t marry her but offered to continue the relationship – she was desperately in love with him, so why do you think she turned and ran instead of taking him up on his offer?

11)              After she lost the baby, Abigail sent John away even though she still loved him, do you think you could do the same?  Why do you think she chose that path of action?

14)              At the end of the story, Abigail indicates that even though Destiny did not get the bonds she wanted her to have, everyone got what was coming to them – do you agree?  Did you feel there was a sense of poetic justice in the final resolution?